All the source code is on GitHub. Comment? Bug? Open an issue on GitHub.

When generating our email in the previous post, we happily ignored the cacheName parameter of the TemplateService.Parse() method. This was wrong.

Not using RazorEngine's cache will result in both dreadful performances and memory leaks.

Generating a document from a Razor template involves some very expensive operations. We'll cover this in more details in the next post but in a nutshell, TemplateService.Parse() will:

Steps 2 and 3 are the expensive ones. Even with a trivially simple template like the one we used in the previous post, the whole process takes more 100ms on my machine. Throw in a layout and a few partials and the process could easily take more than a second.

It also leads to a memory leak as assemblies can't be unloaded from the primary app domain.

Thankfully, RazorEngine makes it trivial to fix this. Simply make sure to always specify a cache name when calling TemplateService.Parse():

RazorEngine will then keep the generated class instance in its cache and re-use it whenever you call Parse() with the same cache name instead of parsing your template again for every call to Parse(). In practice, once a template has been cached, calling TemplateService.Parse() with that same template and cache name is pretty much instant.

IMPORTANT: In the current version of RazorEngine (3.4), each TemplateService instance maintain their own cache. You therefore must use the same instance of TemplateService throughout the lifetime of your application. If you're using a DI container, configure TemplateService to be created with a Singleton lifetime.

The project for Part 03 on GitHub includes a quick benchmark demonstrating the effect of using the cache in RazorEngine.

When we edited the Razor template in the previous post, the Visual Studio editor complained about @model with: 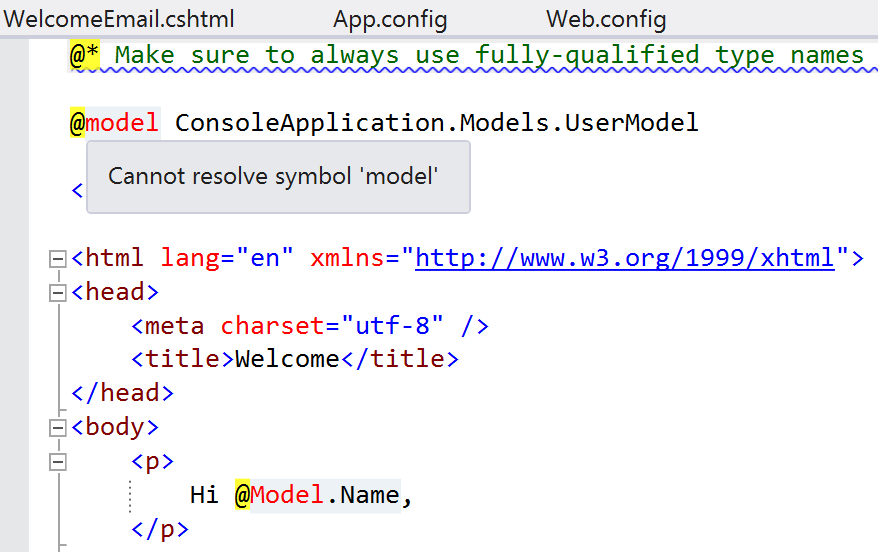 It also didn't provide any intellisense when working with the model. This is because the Visual Studio editor relies on classes in the System.Web.Razor assembly (and a few others) to parse Razor files and provide Razor intellisense. And we didn't have these assemblies referenced in our project.

This is easy to fix:

This will reference all the necessary assemblies.

If you're curious about how the Visual Studio editor works behind the scenes with Razor templates, Andrew Nurse, the main developer of the ASP.NET Razor View Engine, has left a few hints in this blog post.

Getting rid of the squiggly blue lines

The VS editor also threw a rather cryptic error:

This is easily fixed by adding a Web.config file at the root of your project containing:

Yes, a Web.config file, even if you're within a console, desktop or Windows Service project. The file will only be used at design-time by the Visual Studio editor and will be ignored at runtime.

Getting the VS editor to use the RazorEngine base class instead of the one used by ASP.NET MVC

By default, the Visual Studio editor assumes that a Razor file will be used to generate an ASP.NET MVC view. So its intellisense assumes that all the C# code in the file will be part of a class deriving from the System.Web.Mvc.WebViewPage class.

RazorEngine however provides its own base class RazorEngine.Templating.TemplateBase instead. Although TemplateBase implements many of the same properties and methods that WebViewPage has, there are some differences. For example, TemplateBase has an Include() method (used to render partials) that WebViewPage doesn't have. If you were to use the Include() method in your email template, the VS editor would highlight it as a syntax error even though it is a perfectly legal call if the template is meant to be parsed and compiled by RazorEngine.

You can ask the VS editor to use a different base class. Add a Web.config file at the root of your project if you haven't already done so (and yes, again, a Web.config file even in a console, desktop or Windows Service project). Add this to it:

You might have to close and re-open your .cshtml file after having done this for the VS editor to take the config into consideration.

In the previous post, we mentioned that it was mandatory to always use fully-qualified type names for any class used in a Razor template (or explicitely import namespace with the @using directive). Failure to do so would result in a TemplateCompilationException at runtime.

This can become tiring, especially if there are namespaces that you use in every single template (e.g. the namespace containing your model classes).

But you can easily configure your TemplateService instance to include additional namespaces into the generated template classes by default:

Annoyingly, since the Visual Studio editor won't know about these default namespaces, it will still complain about unknown types if you don't excplicitely import all the namespaces in your template files.

You can work around this by adding the extra namespaces in the <system.web.webPages.razor><pages><namespaces> section of the Web.config file (not App.config) as you would do with the ASP.NET MVC Razor View Engine:

Note: RazorEngine also has a App.config-based configuration model. This would in theory allow you to define the default namespaces in your App.config instead of hardcoding them in code. In practice, RazorEngine's XML confguration code seems to be quite broken making it more trouble than it's worth to go down that route.

Well, it's possible and it's quite easy too. 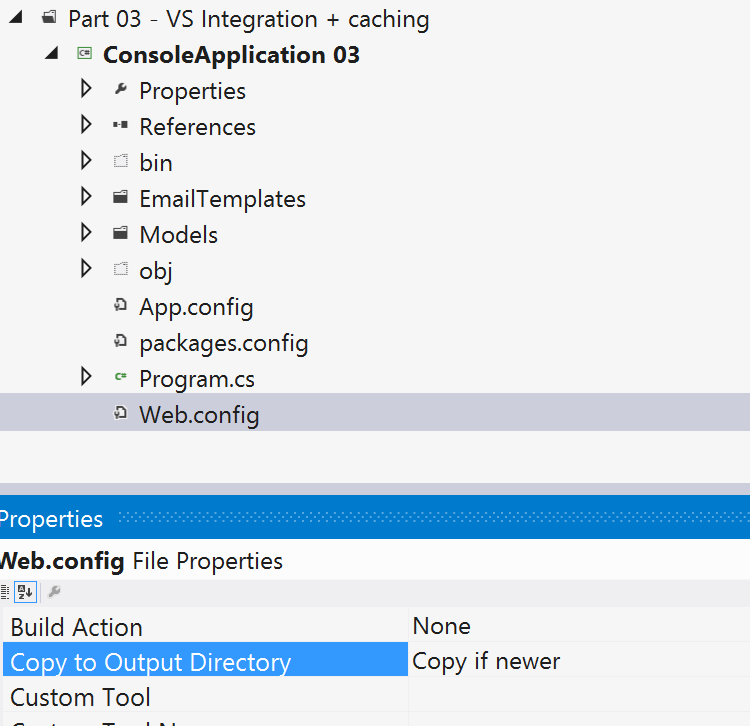 We can now just parse this configuration file at runtime, extract the list of namespaces and add them to our TemplateService instance:

And we're done. The default namespaces are now defined in a single location.

In the next post, we'll take a more detailled look at how the Razor parser and RazorEngine work behind the scene.

I've rather sadly not been able to keep up with this blog as I would have liked. A great but demanding new job at an awesome company[1], two young children and a relocation to Ireland (while still working in London and occasionally traveling to the US) have made it

Since I can't seem to find the time to write an in-depth article these days, I'll cheat for once and just link to others. These are posts that I've come across recently on distributed systems and DDD, the two main areas I'm interested in at the moment. They are all