Ghost.io - the first blogging platform that makes me happy

Blogs have established themselves as one of the main building blocks of the web. Even though it's been a long time since having a blog was the latest fad among self-respecting hipsters, blogs are still just about everywhere. In fact, virtually everything you read on the web today is published as a blog post.

So it boggles my mind that 16 years after the word Blog was coined, the most popular blogging platforms out there are still so goddamn awful - slow, bloated and clunky with dreadful text editors.

So it has been a bit of a revelation when I discovered Ghost earlier this week through their annoucement of version 0.4.

It's rare for me to instantly fall in love with a piece of software, especially an early beta one. But Ghost is one of those rare occasions. It's that good. And, yes, this blog is hosted on Ghost.io.

If you're a blogging veteran, you might want to jump straight through to what makes Ghost so good. But if you're still trying to pick your first blogging platform, this is our blogging story so far and how the various blogging platforms we've tried fared.

When we started Shhmooze back in 2010, we picked WordPress as our blogging platform. It seemed like the obvious choice at the time. WordPress established itself as the de-facto standard in the blogging world and it has an active community and a huge ecosystem of themes and plugins.

We wanted our blog to look like it was part of our website. Which meant creating our own custom theme and hosting it on one of our sub-domains. That ruled out using the WordPress.com hosted version (which doesn't allow custom themes) so we went down the self-hosted path.

Based on this experience, I have one advice to anyone thinking of doing the same: don't. Just don't. Unless that is, you genuinely enjoy pain and have a lot of time to waste.

If you do go down the self-hosted route, welcome to a world where any error during an upgrade operation can leave your site in a completely broken state only recoverable by restoring the entire site from backup. A world where a failure when updating a plugin will result in said plugin silently vanishing without a trace from your WordPress install. A world of dreadful performance even on seriously beefy dedicated servers. A world where nobody seems to know what file system permissions WordPress actually needs. A world where creating a custom theme involves opening HTML tags in one document and closing them in another. A world of insanity.

In fairness to WordPress, some of the issues I ran into could be attributed to the fact that I was hosting it in IIS on Windows - not its natural habitat. But I would still recommend to stay clear from self-hosted WordPress unless your goal is to learn about sysadmin.

Self-hosting woes aside, WordPress turned out to be a rather bloated and not particularly pleasant system to work with. I've found the text editor to be particularly painful. The WYSIWYG option would be better renamed "what-you-see-is-definitely-not-what-you-get" - formating anything with it beyond really basic formatting was an uphill battle. And the sort-of-HTML-editor-but-not-really option only added another level of frustration.

WordPress is a very impressive project. It wouldn't be powering 1/6th of all the websites on the planet without doing something right. But it certainly never made me happy.

When we rebranded to Tickmeet, we looked for a another blogging platform. I couldn't bear the thought of setting up another WordPress install.

After a short but disastrous experience with Google's Blogger (more on this below), we went back to WordPress, this time hosted on WP Engine.

WP Engine have managed the mind-blowing feat of making WordPress bearable. And unlike WordPress.com, WP Engine lets you use any third-party theme and plugin you like and doesn't have any artificial limitations aimed at upselling add-ons.

In other words: WP Engine is just like self-hosted WordPress but fast and without the deep, excruciating pain of having to manage your own WordPress install. Even WordPress updates are completely pain-free and handled automatically by WP Engine.

At $29 / month, it's well worth the money for a company or high-traffic blog. But for your typical 3 pageview / day personal blog, it's a steep price to pay. And at the end of the day, you still end up having to work in WordPress, which isn't an enjoyable experience no matter how hard the WP Engine guys work.

We tried Blogger for a short period of time for the Tickmeet blog. There's not much to say about it: we've found it to be horrendous in just about every respect.

Between the Google Account / Google+ accounts mess, the butt-ugly themes, the sheer difficulty to customize anything to try and make it slightly less awful, the disastrous handling of multiple authors, and many other absurdities, I can't find a single nice thing to say about Blogger beyond the fact that it makes WordPress look good.

You can't possibly talk about blogs without mentioning Tumblr. It's perhaps a testament of my total un-hipsterness and of the fact that I'll never build a billion-dollar company that I never "got" Tumblr.

Tumblr is a cross between traditional blogs, Twitter and Facebook. It encourages short, bite-sized, spur-of-the-moment blog pieces as opposed to longer and well thought out articles. Comments are replaced by a long list of random people who liked or reblogged the post. It relies on everyone being on Tumblr, liking, reblogging and following each other.

I guess that at 32 I'm already too old for that stuff.

I wanted to like Posthaven. I really did. Setup from the ashes of Posterous by Garry Tan, one Posterous' co-founder, it aims at being a nimble blogging platform with a sustainable business model and a pledge of never being acquired. A refreshing approach in a world of "Build 'em, flip 'em." startups.

I signed up and pre-paid for Posthaven as soon as Garry announced it. I then tried to use it for this blog. But despite trying long and hard, I couldn't bring myself to like it.

Substance matters more than style. But your blog is your online brand and it would pain me to direct people to a site that I think looks, well, "not the best". And to a site that also looks exactly like every other Posthaven blog out there.

When it comes to readability, Posthaven's design is quite good... as long as your blog posts are short. For long blog posts, the very limited formatting options and complete lack of any customisation feature make it very hard to format posts in an engaging manner. So you end up with a long and rather unappealing wall of text.

The Posthaven editor only allows you to use a very limited set of formatting styles: headings, block quotes, emphasis, lists, and... that's about it IIRC. No custom HTML or CSS allowed. Even a simple named anchor is a no-go with Posthaven (so no table of content for long posts).

The edit / preview / edit cycle is very, very painful. Just like WordPress, you have to edit your post in one window and preview it in another. In WordPress, saving your draft in the editing window automatically refreshes the preview window, resulting in a very clunky but reasonably efficient working flow.

With Posthaven, saving your draft kicks you out of the editor and back to your blog post list. From there, you can click your post, which open the preview... in a separate window. The preview page has an "Edit" link which redirects your to the editor... in the same window as the preview. Rince, repeat and before you know it you have 15 windows open.

Overall, when using Posthaven, I felt that I was constantly fighting with it. There never was a "wow" moment. It probably just isn't designed for my writting style and taste.

You should check out Jekyll.

A few years ago, it makes little doubt that I would have gone with it. But with my free time having now become a scare resource, I want to dedicate it to things I'm really interested in. And I admit without shame that I have no interest whatsoever in blogging tools or platforms.

I want my blogging platform to just let me write from whatever computer I happen to be on and to take care of everything else for me. So while Jekyll looks really neat, it's probably not going to fit the bill for me.

So what makes Ghost so good?

Ghost is one of the newest kid on the block. It was kickstarted in May by John O'Nolan, a former WordPress UI guy, and Hannah Wolfe via a ridiculously successful Kickstarter campaign.

Just like Posthaven, it aims at remaining an independant business with a sustainable business model. The blogging platform is an open-source Node.js app, the company has been setup as a not-for-profit organisation and beyond the initial Kickstarter funding, it offers a $5 to $80 / month hosted service and and a marketplace for free and paid-for themes.

Ghost is still in early beta stage. Although it's already very stable and perfectly usable, it obviously can't compare to WordPress or even Blogger feature-wise.

But that's beside the point.

Ghost has already succeeded at the most important thing: it made me happy. None of the other blogging platform I've used ever managed to do that. Everything about Ghost so far has been a beautiful experience.

And it all starts with the text editor.

Why did it take so long?

Seriously, why did it take so long for someone to create such a beautiful and usable text editor for web publishing?

With other blogging platforms, I would always end up writing my posts in a plain text editor, dreading the time when the post would be complete and when I would then have to move to the frustrating, banging-my-head-against-a-wall task of formatting and publishing it with one of those godawful blog post editors that WordPress or Blogger use.

Ghost makes the whole process a pleasure from start to finish: 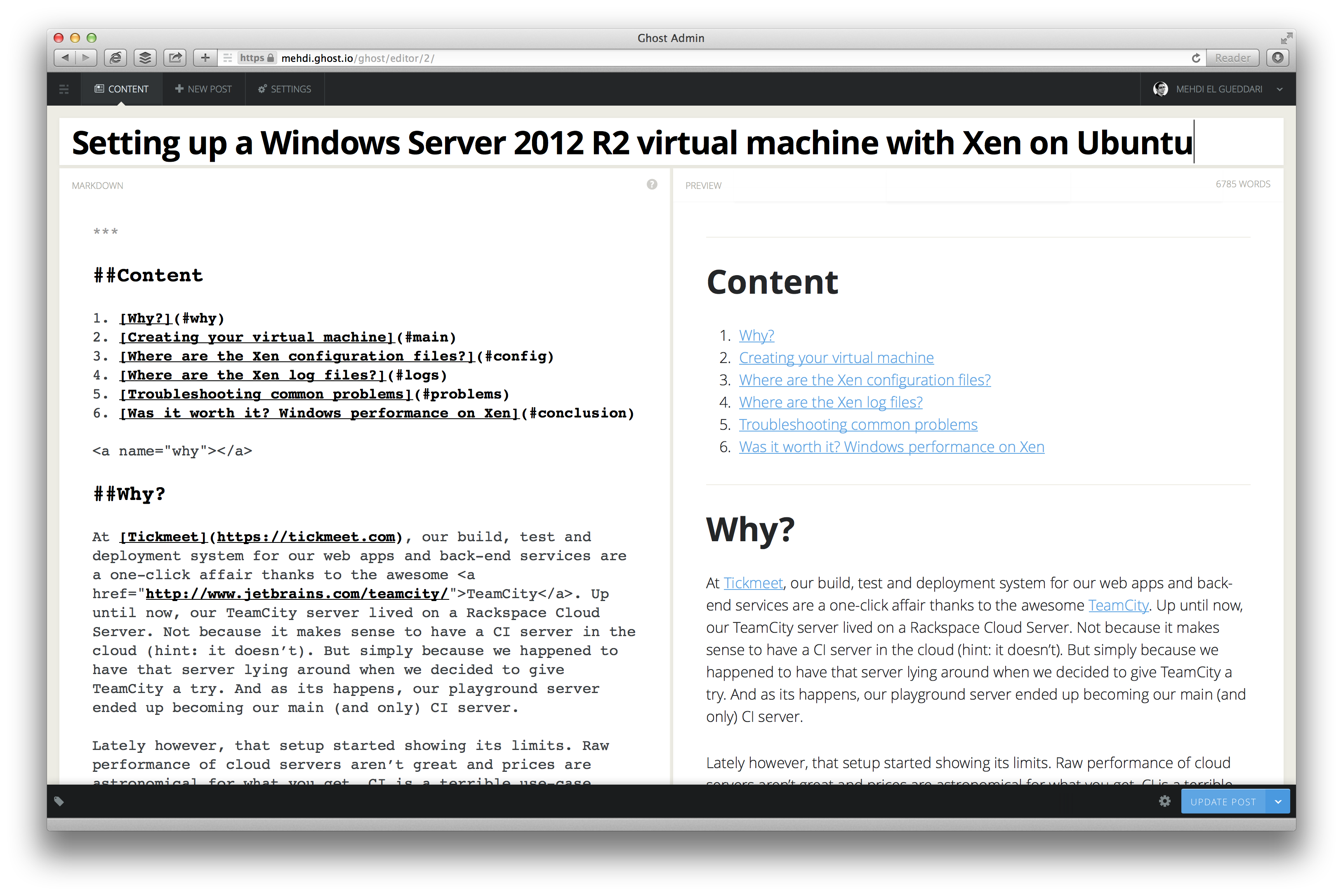 Write in markdown on the left. See a real-time preview on the right. Simple. Beautiful.

It would seem rather obvious that a web publishing platform should publish content that looks good by default. But you'd be surprised at how much work some other blogging platforms require you to do if you want something that looks even just half-decent.

Ghost looks good by default. While it won't win any design awards, its default theme is clean, uncluttered and pleasing to the eye. That giant hero banner on the home page is perhaps its only faux-pas.

There's a perhaps less obvious but equally important consequence of being built to look good by default: the third-party ecosystem. Anyone who has used both Windows and OS X might have noticed that the level of polish of third-party apps on OS X has always been significantly higher than that of Windows apps. It's not until Windows 8 and its very polished Metro UI that Windows developers have started to really pay attention to UI details.

The attention to details of the platform has a big impact on its third-party ecosystem. With Ghost being clearly built with simplicity and beauty at its core, I would bet on a raft of stunning themes being created for it by third-party designers.

As uncluttered as it gets

Its admin panel displays your blog posts. And nothing else.

Click one of the blog posts and you get a live preview. Simple. Beautiful. 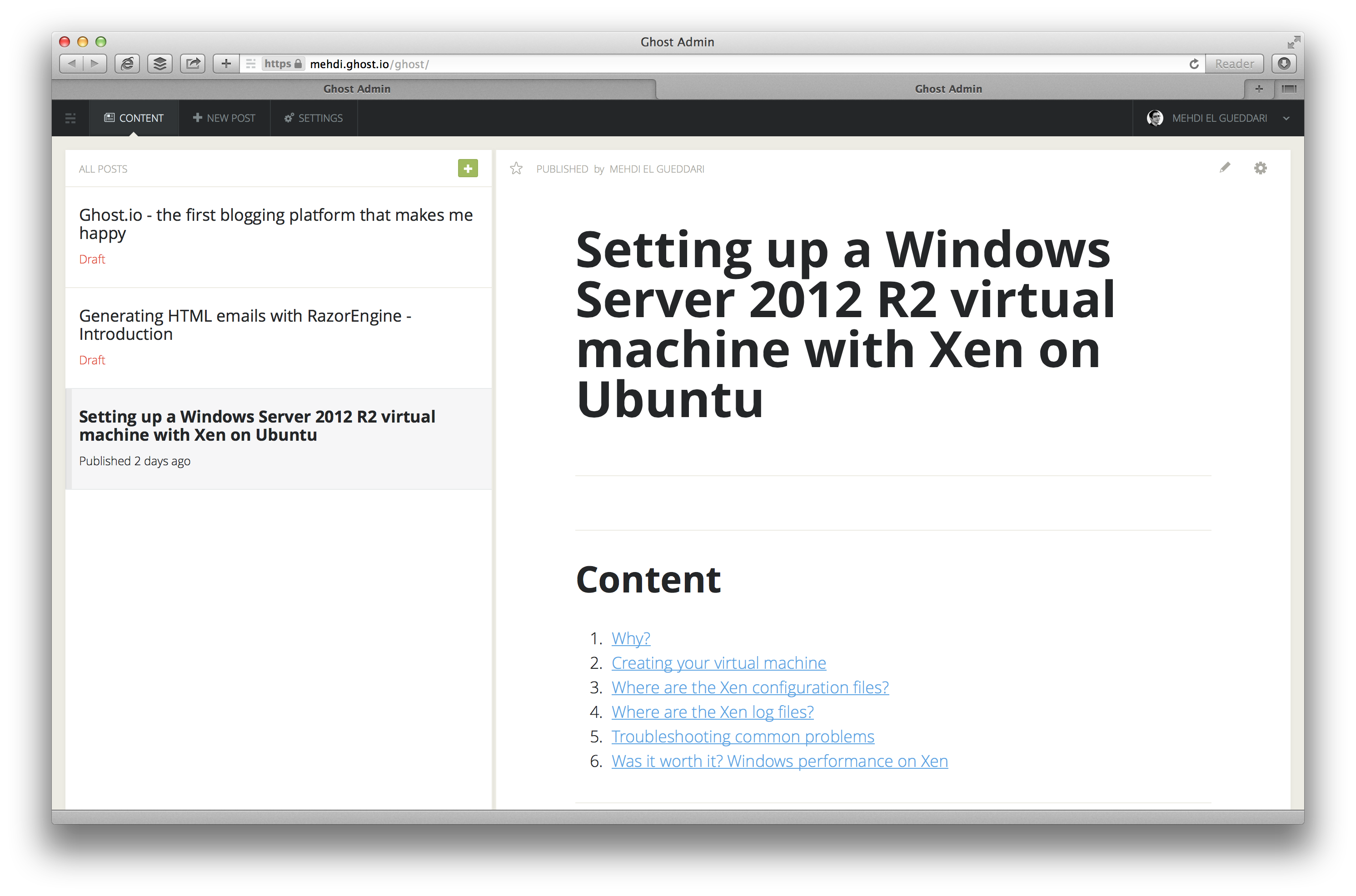 Here's to the future

I can't wait to see what the Ghost team will come up with in the coming months. This is the blogging platform I was waiting for.